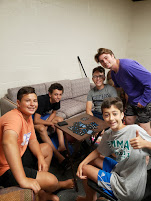 This morning we had egg and cheese muffins, cereal, and fresh fruit for breakfast. The teens spent their mornings on the lake, water skiing, tubing, and staying cool! Splash Water Sports from Pittsburgh joined us again this session for scuba diving lessons. Halutzim boys dressed up in scuba gear and joined unit head Howie in the pool!

In Drama today, Street 2 and 3 worked on stage combat! They learned the 1-2-3s of basic stage punching: prepare, strike, and follow through. They also learned how to make the noise of hitting someone and basic fighting choreography! Then, they combined all of this into scenes their groups choreographed and performed.

For lunch we had chicken nuggets, tater tots, and the salad bar. Gesher campers cooled off in the wading pool while scuba lessons continued. Sabra campers played a game at the water slide! Ben Katz stepped up to bat, slid down the water slide, and was safe in the hula hoop before anyone caught the ball!

We stayed out of the sun (other than at the pool and lake) this afternoon in order to keep cool.  Campers baked cookies with Rachael Speck in the camper kitchen. Next door, Kineret and Halutzim campers participating in the variety show practiced their choreography and music in the dance studio! They harmonized and learned new dance moves- We can’t wait to watch the show!  Sabras played slip n’slide cricket!

Cookout time! We moved this week’s cookout into the dining hall to give everyone some extra time in the air conditioning.  For dinner we ate burgers, hotdogs, pasta salad, and more! Then we got ready for Sababa, themed Around the World.  We had a dance party in the dining hall until it was time for bed. We have a big week ahead of us: Israel Day is Tuesday, Halutzim go skating at Swaney’s, scuba lessons again this week, and Kineret campers have two Tiyulim trips!