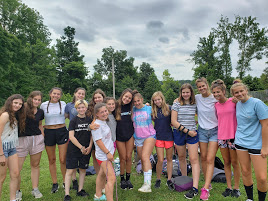 We had a camp favorite for breakfast this morning: french toast sticks with syrup! We also enjoyed yogurt with fresh fruit and granola before meeting at the flagpole. Afterwards it was right into activities! Sabra girls learned the basics of whiffle ball this morning, like stance, holding the bat, and swinging. Sabra boys continued their archery lessons while the Gesher and Teens introduced themselves to each other with a game!

Kineret boys painted rocks in Arts & Crafts today! Some chose to take their rocks home, while others used them to decorate the art shed. Teen boys practiced their observational skills in Drama today. A group lined up and struck a pose while the remaining boys tried to memorize their poses in 10 seconds. 5 of them changed something about their pose; it was up to the others to figure out what!

Another group of teen boys settled into the savasana pose, lying flat on their backs for some meditation time in dance. Next door Halutzim girls tried their hands at baking crepes! They had Nutella, whipped cream, strawberries, bananas, and chocolate sauce for toppings. Meanwhile, Sabra girls began shaping their pottery in ceramics before heading to lunch!

Lunch was grilled cheese with tomato soup, penne pasta, and the salad bar! After lunch, campers that want to be in the variety show auditioned in the playhouse. Before dinner the Sabras and Teens met for Big Brother/Big Sister! Unit heads Aaron and Jordan gave each camper a notecard with an animal; teens and sabras found their big/little by finding the camper making the same animal noise! They got to know each other with some questions, like “if you had any superpower, what would it be?” Then they played rock, paper, scissors in teams!

For dinner we had baked ziti, stuffed shells, capri veggies, salad bar, and breadsticks! Tomorrow the Sabras will enjoy their pool party while the Kineret boys have their undernight! We have lots of water activities planned for this week, too!