We chowed down on scrambled eggs with cheese, oatmeal, cereal, and fresh fruit for breakfast. After schticks around the flagpole, we were off to activities! SITs met in the upper ballfields for a game of kickball, Halutzim boys played hockey in the pavilion, and teen boys played soccer and shot arrows at archery! Halutzim campers also painted the rocks leading to the amphitheater this morning for Colorfy Camp, an initiative from the Arts & Crafts supervisor Lindsey Weaver to beautify camp!

For lunch we had macaroni and cheese with potato wedges and the salad bar. After rest hour, Quads 5 and 6 met at the basketball courts for a game and the pool was busy with free swim! Circle 2 Sabra campers got to test their aim with archery for the first time today. They learned how to hold the bow, load the arrow, and shoot!

In the gazebo for music class with Mason, a group of Kineret boys played musical Jenga! Each block of the tower had an artist or a song on it, and they had to sing the song on the block they removed. After it fell, they played a game of finishing the lyrics, where each person said one word of a song. 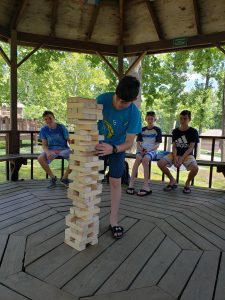 After a snack and dance party at nosh, Halutzim girls headed to Drama. They played a version of musical chairs where one camper stands in the middle and says a fact about themselves, like they have a dog. If anyone else in the circle also has a dog, they stood up and raced to a new chair! Meanwhile, Street 10 girls painted rocks in arts and crafts; Sidney turned her rock into a carrot!  They said it was their favorite activity of the day! 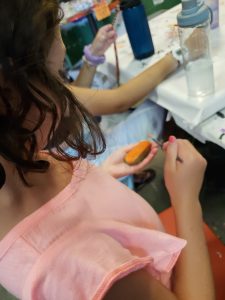 Dinner was chicken wraps, noodles, the salad bar, and a falafel making station with hummus; delicious! Teen leagues begin tonight, and the Sabras have their pool party in two days! It’s been a full, sunny day at EKC!